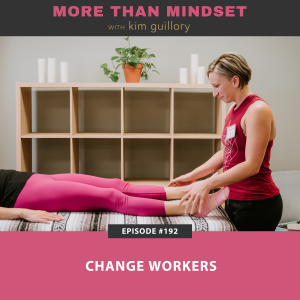 It’s time to celebrate those change workers in the world, the risk takers, the believers that came before us. Those who have been studying and researching and putting themselves out there.

Join me in E-School where we help holistic practitioners and coaches create sustainable wealth and impact. Build your audience, help more people, and make more money!

What You’ll Learn From This Episode:

Listen to the Full Episode:

Featured on the Show:

Welcome to More Than Mindset, the only podcast that bridges the gap between spirituality and success. Go beyond the mind with clarity and confidence Coach Kim Guillory and learn how to integrate your passion to serve with your skills and experience to create a business you love. Let’s get started.

Hey guys, and welcome back. I should still be traveling, coming back home from the conference in Michigan. And you know what I’m most excited about? I was really thinking about this the last few weeks, is we have come so far. It feels like it takes forever. Matter of fact, it feels like we may never arrive. Yet here we are at a hypnotherapy conference—a hypnosis conference—that we have now reached a point in time to where there are several conferences throughout the year. There was a time when people were not open to this at all, but there are so many healing modalities now that we have become open to. That we have let our guard down.

You know, we have been told all of these fearful things over the years that we should be careful about, and we should watch out, and letting someone gain access to your mind is a really scary, bad, and evil thing. But here is what I know. Our minds were controlled a very long time ago. We were hypnotized to the environment that we were raised in.

Our upbringing planted most of the seeds of doubt, of disbelief, of fear, of unworthiness. Why? Why did I listen for so many years to people talking about this being bad or wrong? Isn’t it interesting? I’m just going to celebrate and be in gratitude of the times that we do live in, the efforts that we have put forward, and where we have arrived.

Because my mind loves to think about how we’ll never get there. “It’s taking too long. I’ve been doing this forever.” Right? All of these things, it’ll never happen. It’s like a battlefield. The mind is a battlefield because, you remember, it’s just a projector. It’s just feeding us information that we toll it through our own experiences.

So, I went to celebrate coaching, mindfulness, yoga, meditation, energy work, Reiki, hypnosis, trance, all the things that are now gifts to unpack, uncover, unveil the deception that was planted in our minds a very long time ago. That we can now rewrite or reframe that into information that actually works for us.

So, yay! Yay for the game changers, the risk takers, the believers that came before us. Those who have been studying and researching and putting themselves out there. Like even the witches of the day, who knew a better way and were hurt because of it, because of wanting to help others. Because of wanting to create change or expose a new way, you know. And all of this fear, and concern, and deception has really gotten in our way.

And religious dogma. Oh, that’s… that’s a big one. I could do a 10-week presentation on this one because it was such a big part of what held me back. And it’s not that religion is wrong or bad. It’s the perception and the misinformation coming from the threats and the planted fears of some of what is just the human condition.

The limiting beliefs that are such a big part of the engine that runs us have come from these things. Environmental messaging. That is the workplace, and the grocery store, and the ballpark, and the environments that you’re in. The messages that have been normalized or dictated. Those are like a huge problem. Because it’s misinformation that has given us a perception, or a misinterpretation, and it’s affected us. It’s affected our health, it’s affected our finances, it’s affected our families. It is such a huge part of why we have not been able to create change. Because we’re stuck in these cycles and these beliefs, and then we have guilt about our parents and grandparents and those who maybe are still stuck in it.

And then we have this worry about being alone, right? Because it’s a lonely world when you change your thinking and those in your environment and your family don’t change with you. It’s very painful; that loneliness is painful, and it’s scary. And the mind starts feeding you all kinds of stories of how you’re going to die alone. No one will ever love you. Right? It’s intense. And when we can recognize it, we don’t have to call anyone out. We don’t have to stop anyone else from doing anything. We actually just need to be aware of it for our own sake so that we can live in a different way. Live in the perspective of joy, and ease, and satisfaction, even personal satisfaction.

Yes, it is not wrong to be selfish. It is not wrong to be personally responsible for your needs being met. That’s actually your responsibility, and that is what coaching, and mentoring, and mindset work is about, is to help other people step into personal responsibility. How can they be personally responsible for meeting their own needs? You know? And understanding that it is uncomfortable when the tribe disagrees when the culture doesn’t approve of change. I feel like I’m kind of preaching at the pulpit here, but it is, for me personally, a pleasure to see the gifts of hypnosis, and trance, and mindset, the gifts of energy work, of working with the unconscious, the parts of us that we have hidden because of shame. Because of disconnection, because of fear.

And the subconscious, the parts of us that repress because we’re afraid to be who we are. And we’re afraid to stand up against something different. And we are afraid to be isolated and shunned and left alone and abandoned, right? But with these tools, we can come to a new awareness and become empowered through control. Controlling the mind. Controlling beliefs. And through mental management and emotional stability. In other words, being able to regulate the emotional system when the mind feeds us these fears, these worries, these stories about what could happen or what could go wrong. If we have the ability to manage and regulate the nervous system, then we can move all the way through this transformation. Not just for ourselves, but for generations to come. Not just for our families, but for all the families. Not just for ourselves and our household and our environment, but for humanity.

We are sitting in a time of change, and we have change workers who have been on the front line, who have actually lost their lives to bring this work forward. And I just want to take a moment of gratitude and be mindful of how impactful and how important that is, and how many lives have been saved because of it. And that is mine included. Because I didn’t know another way. I was really stuck in misery and pain, with so much physical pain and poverty mindset. And I wasn’t able to show my family something different because I was stuck in it.

I’m here. We’re doing this. And I invite you to be a part of it. If you are a coach and you are helping others, and you’re finding that they are staying stuck in some of this stuff, some of these beliefs, and they’re not able to change, and stop drinking, and stop overeating, and stop overspending, and get caught up with what is possible, and to optimize the potential that is within them? If that is you, I invite you to the 10-week Advanced Coaching Intensive.

Not just for your client, but for you. Because your client is a mirror, is a reflection of you, of where you are, of what your stuck point is. And so, if we can help shift it in you, then you can help shift it for society. Right? Guys, I am on fire. I am ready to make the changes needed for my family to see. I want to show them what’s possible, and I’m looking for those others who want to show their family what’s possible by being the example of that possibility.

I wish you an amazing week.

Thanks for listening to this episode of More Than Mindset.

We're not around right now. But you can send us an email and we'll get back to you, asap. 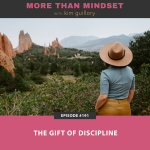 Ep #191: The Gift of DisciplinePodcast 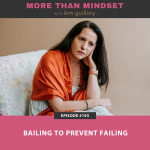