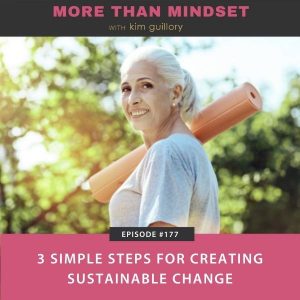 Change is always happening around us, but how do we start making deliberate, intentional changes in our lives? Mastering the process of intentional change isn’t easy, but it is possible. So, in this episode, I’m sharing the three most important actions you need to take to create real change.

Change doesn’t have to be complicated. Maybe you’ve taken inspiration from a book, or you’ve been watching somebody else doing what you want to do, or maybe you just woke up and decided you want to do the darn thing. Whatever it is you want to create, I’m showing you how in this episode.

Change is the only constant in life, so why not make it more intentional? Tune in this week because I’m sharing the three simple actions you need to take in order to change your life in just 90 days. I’m showing you how to make space for a new experience in your life, come up with the plan that’s going to change everything, and activate the plan so you can move forward.

Join me in E-School where we help holistic practitioners and coaches create sustainable wealth and impact. Build your audience, help more people, and make more money!

What You’ll Learn From This Episode:

Listen to the Full Episode:

Featured on the Show:

Welcome to More Than Mindset, the only podcast that bridges the gap between spirituality and success. Go beyond the mind with clarity and confidence Coach Kim Guillory, and learn how to integrate your passion to serve with your skills and experience to create a business you love. Let’s get started.

Hey there, and welcome back to the More Than Mindset show. This week I am talking about change. How do you create change? Or how do you master the process of change? What do you do when you want to change something in your life? I’m going to give you the three main things to do. So take out your paper and pen and get ready for this one. It’s going to be short, but it’s going to be powerful.

So you know when you just decide you want something different, right? That’s the first thing that happens, there is a vision or an idea, or you see something that someone else is doing, or maybe even read it in a book and then there’s the possibility. Something happens inside of you, it could be just finally making the decision to do the darn thing, right?

It can be something as simple as that. Like, no, we are going to figure this relationship thing out. We’re going to do something different, or we’re going to make the move, or I’m going to launch this business, I’m ready to get it going. And I’m thinking that because we’re in the middle of the Business Liftoff, which is so much fun. You guys got to catch one of these, I do them fairly often. Anyway, side note.

So let’s just say you decide that you want to create some sort of change in your life intentionally. Because if we were to be honest, we would recognize that change is the only constant in life. There is all ways to change. Look in the mirror, there is no way to stay the same, it is impossible. So change is always happening around you.

So eliminate, get rid of something and then collaborate. And guys, just so you know, I did this last month and my collaboration was with myself. So it was with the older version of myself and the newer version of myself. And we sat down and had a powwow and really decided on what it was going to look like from this day forward.

If you remember going back a few episodes I talked about being in the alley and then taking the door and looking into the blackness, the darkness and not knowing what was next. It was kind of that moment where I had a little come Lord Jesus with myself. So it was collaborating, making a decision. But I also had the conversation with my team, with my family, with those who I am closest to. And so there was collaboration.

So number one is elimination. Number two is collaboration. And number three is activate. So after you eliminate and you collaborate, you inform those who are going to do it with you or who are going to be supporting you, or maybe those who will be watching you and cheering you on. Hopefully you have cut away those vampires who are not cheering you on so that they don’t eat your belief.

So activate, what’s the first three letters of activate? A-C-T, act, you want to take action. So in the collaboration you come up with the plan, you decide, you determine. And then the last step is to actually activate that plan. So what are the steps that you are going to take to move forward? What are you actually going to do?

This could look like new steps that take you all the way to the end game, and then you reverse engineer and you start at point one, work yourself all the way to point Z. This could be what I call the swipe left. It’s like left is the limiting beliefs, the memories of the past, all of the doubts, all of the things and the people and the experiences that you have had that prove you can’t do it, right?

Those are the thoughts of the mind when the mind is kind of arguing with your potential, arguing with the possibility of what you want to create or moving forward or doing something different. So you are going to activate a plan, you’re going to take action consistently. And then you can keep going through this process.

So activate could look like turning and walking away. Not eating those Oreos. Not saying the thing that you really don’t want to say but you feel like you have to say, you know what I’m talking about, that behavior. It could be not going back on the sofa, not getting back in the bed. Activate could look like putting your feet on the floor, putting your workout clothes on, grabbing your water bottle and stepping out of the house. It’s the action that you take. You want to activate the plan.

So I’ll go over all of these. If you want to create change purposely, intentionally, that is sustainable and even predictable, you will take these three steps. You will eliminate something, get rid of something that was to decide what you will be replacing. So that is gone, now I am this. I’m not her, I’m me now, whatever that looks like.

You determine what you are going to get rid of. And then you collaborate with people who support you. You build a team, you build a network, you get the support that you need, you gather around. And this is with believers, it’s not with belief vampires. It’s not with those people that you have to convince.

It’s with people who actually help support you so that you can stay in the game. They encourage you, they believe in you. They might not believe it for themselves, but they could hold the space for you to continue to believe it for yourself. So when you’re collaborating, you’re making a plan, a decision, they’re on the same page, you’re agreeing, you know who your supporters are, you’ve already eliminated those who don’t support you, the doubters, the naysayers.

And then whatever you determined is going to be the action plan, you move forward doing that act. Taking action and you activate the change fully and completely on all three levels of belief. The way you think, so it’s mental belief. The way you feel, which is emotional belief. And then viscerally, so that is all the way through the blood and the organs and your way of being.

I want to hear about this commitment to change. I want to share your successes, I want to hear your success stories. And if you have friends who are always talking and not doing share this with them. And give me a review, let me know that you enjoy listening to the podcast so that we can get it to more people. Ratings and reviews really matter, especially in these digital days.

So this is what you need to do. You need to eliminate the talk and you need to collaborate with yourself, make that commitment, make the plan. And then you need to activate the plan by actually doing it so then you can actually create the change. You become the creator, you control the outcome. Doesn’t that sound good?

So a lot of times, you’re at the mercy of life instead of getting life to work with you, getting it to work for you and actually doing what you say you will do. Activating what you want, live the vision right now. This is something we talk about in E-School all the time because I see it, it’s a lot of dreamers and hopers and prayers. And it’s like, guys, you have the tools right here, we’re telling you exactly how to do it.

If you take the steps every single week, because this is done with you, it’s also done for you. If you’re not going to take the steps you can actually pay us to do some of some of the stuff for you that’s going to help you. But what’s happening is the desire to change is not strong enough to overcome the doubt and the disbelief. So you got to get really clear on your why so that you can decide these three things in advance.

I promise you it works. I do this on a daily basis, I’ve been teaching this for years. I want you to try it. And I would love to hear how it’s working for you. Come to the More Than Mindset group and share your outcome or at least just tell us what are you changing. What are you determining and committing to being different? Because you will not get creative to the steps of doing this until you commit first. You remember the C-step solution, choose, commit, cultivate, cutaway, and then continue, this is taken directly from that.

All right, my friends, have a great week, go out and experience some change. And by golly, have fun doing it.

Thanks for listening to this episode of More Than Mindset.

We're not around right now. But you can send us an email and we'll get back to you, asap. 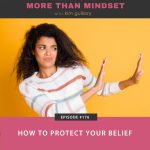 Ep #176: How to Protect Your BeliefPodcast 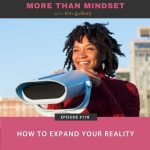 Ep #178: How to Expand Your RealityPodcast